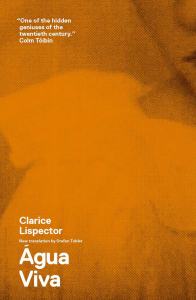 I brought along a copy of Clarice Lispector’s  Água Viva with me on my beach vacation last week thinking that a book whose title can be translated as “living water” or “jellyfish” would be quite fitting.  I quickly realized that Lispector’s book, although a mere 86 pages, would take me some time to read and fully absorb.  I had to approach this text as I would a dense, meditative, philosophical volume of poetry, something to be digested slowly, one small piece at a time.

This book is nearly impossible to critique, but on a the most basic level it can be described as an unnamed narrator attempting to capture her thoughts about intense, philosophical topics such as time, life and death.  She tells us that up until this point she was engaged in painting but has put down her paint brush and taken up her pen and typewriter instead.  Throughout the text she is acutely aware of her process and oftentimes returns to discussions of painting and music and the similarities among all of these art forms.  She is also very fond of describing things in nature—flowers, a turtle, cats, a cave, oysters, the sea are all beautifully described as she experiences them.  The narrator seems to be addressing a lover but so much of the text reads like a personal meditation that the text could very well have been written as a meditation to the author herself.  But, as so often happens with this book, just when we think we grasp her meaning, she reaches for another topic which may or may not be connected.

I noticed during my first time reading through the text that the words free and freedom appeared quite a few times.  I kept this in mind as I read Água Viva  through a second time and had a very different experience than my first encounter.  I actually went back and counted and found she uses the words free or freedom sixty times in this short narrative. The title of her book, which evokes images of the ocean, is especially fitting because of the freedom and weightlessness we feel when swimming in the open sea.  In addition, the narrator’s unstructured writing frees her from the constraints of a traditional narrative and she often returns to a discussion of her process throughout her text:

A new era, this my own, and it announces me right away.  Am I brave enough? For now I am because I come from the suffering afar. I come from the hell of love but now I am free of you.  I come from afar—from a weighty ancestry.  I who come from the pain of living. And I no longer want it.  I want the vibration of happiness  I want the impartiality of Mozart.  But I also want inconsistency.  Freedom? it’s my final refuge.  I forced myself to freedom and I bear it not like a talent but with heroism: I’m heroically free.  And I want the flow.

But her interest in freedom goes much deeper than the form, or lack of form, that her writing takes.  The narrator’s existential crisis is being worked out on the pages before us in an attempt at self-knowledge that will make her free.  As I read through her text I was also reminded of the many factors in our lives that make us feel chained down, not free—clearly defined gender roles, time, space, love.  Love, in particular, seems to threaten her freedom on more than one occasion.  But she  always writes her way out of her restraints and embraces her freedom.  I will end with a few of the passages in which she contemplates this freedom:

To remake myself and remake you I return to my state of garden and shadow, cool reality, I barely exist and if I exist it’s with delicate caution.  Around the shadow is a heat of abundant sweat.  I’m alive.  But I feel that I have yet to reach my limits, borders with what? without borders, the adventure of dangerous freedome.  But I take risks, I live taking risks.

And suddenly I feel that we shall soon part.  My frightened truth is that I was always yours alone and didn’t know it.  Now I know; I’m alone.  I and my freedom that I don’t know how to use.  Great responsibility of solitude.  Whoever isn’t lost doesn’t know freedom and love it.