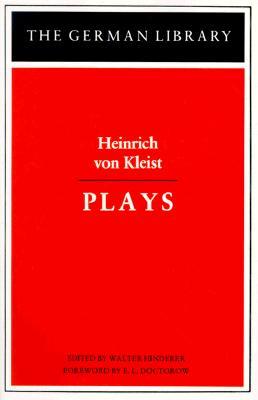 As I was reading Klest’s tragic play, I kept thinking about Ovid’s imagery in Amores IX in which poem he portrays love as warfare.  The Latin poet writes:

Ovid proceeds, in the rest of his poem, to lay out the similarities between soldiers and lovers: both must keep up a constant vigil, pass through companies of guards and be willing to fight against challenging obstacles.  Kleist weaves this theme of soldier-as-lover throughout his tragedy, but what is unique to the German writer’s use of this motif is that he applies it to both male and female.

Odysseus and other Greek warriors are the first to appear on stage in the drama.  They describe Penthesilea, this strange Amazon warrior, as a crazed woman who can’t settle on an alliance; she fights both Greeks and Trojans alike.  As the Greeks approach her to make an attempt at an alliance with her Amazon forces, she sees Achilles and can’t take her eyes off of him.  From that moment forward, her greatest desire is to take him as her captive.  But, as the customs of her all-female society are gradually revealed in the play, we understand that her motives for overtaking the Greek hero in battle are unusual—warfare for her is a means to achieving love.

Kleist, in an attempt to build classic dramatic suspense, doesn’t give his main characters any dialogue until the fourth scene of the play during which Achilles finally makes an appearance.  We have been told by the other characters that Achilles has narrowly escaped being overcome by Penthesilea and he is very angry that a woman almost got the better of him.  At this point he has no romantic feelings for this woman, but her attack causes him to go into a rage and he refuses to go back to the Greek camp until he engages her in battle.  Kleist’s speech is a brilliant and emotional inversion of Ovid’s image of lover acting as soldier.  In Achilles speech it is the soldier whose actions resemble that of a lover:

A man I feel myself and to these women,
Though alone of all the host, I’ll stand my ground.
Whether you all here, under cooling pines
Range round them from afar,
Full of impotent lust,
Shunning the bed of battle in which they sport
All’s one to me; by heav’n you have my blessing,
If you would creep away to Troy again.
What that divine maid wants of me, I know it;
Love’s messengers she sends , wings tipp’d with steel,
That bear me all her wishes through the air
And whisper in my ear with death’s soft voice.
I never yet was coy with any girl.

Warfare is described with terms normally associated with love—the bed of battle, for instance—which not only lends emotion to Achilles’s speech, but also foreshadows what will develop between him and Penthesilea.  Later, when he meets her in battle he can’t believe that a woman who can fight with such ferocity and skill exists; it is her prowess as a warrior that causes him to fall in love immediately.  When he wounds Penthesilea in their skirmish, he puts aside his weapons and professes his feelings for her.   He sees in this fierce woman, a soul that is equally as intense and misunderstood as himself.  One of the most shocking declarations Achilles makes in the entire play is to Penthesilea: “Say to her that I love her.” Kleist’s Achilles is just as passionate and emotional as that of Homer’s; what is shocking about this version of Achilles is his declaration of the emotion of love, and for a woman who is not his captive or his prize.

The image of lover-as-soldier and soldier-as-lover also pervade Penthesilea’s speeches and actions.   The very reason she is on the battlefield in the first place is to find a man as a partner.  She explains the savage founding of her female city where men are not allowed to live or fight.  A warlike tribe of Scythians invaded their city, Penthesilea explains, killing all of the men and taking the women as their captives.  After suffering horrible abuse, the women fought off their subjugators and banned all men from the city as the women themselves became fierce warriors.  The Amazons continue the lineage of their city by conquering men in battle, bringing them back to the Temple of Diana  where they mate with the fertile Amazons in what is called the “Feast of the Flowering Virgin.” 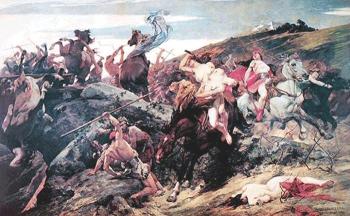 The war at Troy with the Greeks was the Amazon’s perfect opportunity for subduing soldiers for the annual mating ritual.  Penthesilea doesn’t expect, however, to find such a spectacular hero and mate as Achilles and she is overcome with passion for him to the point of madness.  In an even stranger inversion of Ovid’s poem, the female becomes the soldier of love:

Do I not feel—ah! too accursed I—
While all around the Argive army flees,
When I look on this man, on him alone,
That I am smitten, lamed in my inmost being,
Conquered and overcome—I Only I!
Where can this passion which thus tramples me,
harbor in me, who have no breast for love?
Into the battle will I fling myself;
There with his haughty smile he waits me, there
I’ll see him at my feet or no more live!

Once Achilles and Penthesilea finally meet they confess their deeply intense love for one another.  But an issue as to where they would reside—among the Amazons or back in Greece—causes a misunderstanding that leads to tragedy.  Kleist’s ending for both of these characters varies greatly from that of Homer and the Greek tradition in epic.  I usually find it hard to read sources that alter the Greek tradition, but Kleist’s play preserves the spirit of these fierce warriors and lovers, so I was able to get beyond his changes to their story.  I will end with a line from Ovid’s Amores that sums up what happens to both of these soldiers/lovers:

Those whom you would never have thought possible to be brought down, they fall.

As a side note, I read the translation by Humphrey Trevelyan that is included in the German Library’s edition of  Kleist’s plays.  I found the archaic language and verse distracting at times.  I just ordered the translation by Joel Agee and published by Harper which is a prose translation with illustrations.  I am very interested in comparing the translations.  Has anyone else read either of these?

15 responses to “Love is War: Penthesilea by Heinrich von Kleist”