An Addendum to my Personal Canon

When I recently wrote a list of the books that have had the greatest impact on my life, I naturally included several ancient authors.  Each work on the list is something I have translated myself and I was thinking about those texts in the original Latin or Ancient Greek.  But I have had many inquires about my favorite translations of these texts, so here is my addendum.  This is by no means an exhaustive list, but these are the old chestnuts that I return to time and again:

Homer, Iliad: The Robert Fagles translation is still my favorite (the intro. to this text written by Bernard Knox is worth the price of the book alone).  For those who want something more daring, Chapman’s translation of Homer is also something I have really enjoyed.  And for those who want something really daring, Christopher Logue’s interpretation of the Iliad, entitled War Music, is stunning (regular readers of my blog will know that I flipped my lid over this and wrote four different posts about it.)

Aeschylus, Agamemnon: Once again, I have to go with the Robert Fagles translation of this which is a Penguin Edition.  This edition also includes translations of the Libation Bearers and the Eumenides.

Sopocles, Oedipus, Antigone: The Penguin edition is my favorite which is translated by Robert Fagles and includes all three of the Theban plays. (Can you tell that I am partial to the translations of Fagles?)

Plato, Symposium: The Tom Griffith translation by the University of California Press is still my favored edition and also includes engravings by Peter Forster.

Aristotle, Poetics: I still go back to the first translation of this I’ve ever read by Leon Golden published in 1968 by Florida State University Press.  It also includes an excellent 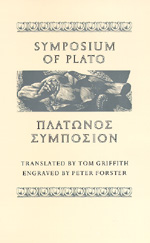 Catullus, Carmina: Although the English is a bit Archaic since it was originally published in 1913, I still love the Loeb translation edited and revised by G.P. Gould.  This edition also includes the poems of Tibullus which I also highly recommend.  Tom, whose erudite writing about classic literature can be found at Wuthering Expectations, recommended the Horace Gregory translation published in 1952 which I am thoroughly enjoying!  I have been reading the translations from Gregory this semester as I translate the Latin text with my students and it has been a most enjoyable experience.  Sometimes a different translation, even an older one, gives us fresh eyes.

Vergil, Aeneid: I’ve always loved the Robert Fitzgerald translation of the Aeneid which is the Vintage Classics edition, that is, until Robert Fagles published his. I also am excited to read the new translation of it that will be published by the University of Chicago Press in the fall of 2017.  Word on the street is that David Ferry’s new translation is fabulous.  Stayed tuned for my official opinion.

Seneca, everything he wrote, especially The Trojan Women: I love the dual language edition by Elaine Fantham which has been out-of-print for quite a while.  The introduction and the commentary are extraordinary.  There is also a new translation of all of Seneca’s plays that was just published by The University of Chicago Press.  Elaine Fantham was part of the team of editors and translators on this project before she passed away and I am very eager to devote my full attention to these new translations.  Stay tuned for my thoughts!

Ovid, Metamorphoses, Heroides: For the Metamorphoses I have always loved Rolfe Humphries’s translation that was originally published by The University of Indiana Press in 1960.  The translation by Allen Mandelbaum published in 1995 is also excellent.  Finally, the A.S. Kline translation is also very good and is available online here: http://ovid.lib.virginia.edu/trans/Ovhome.htm

The Loeb edition of the Heroides, translated in 1914 by Grant Showerman and revised by G.P. Gould, is still my favorite. This edition also includes the Amores which I very highly recommend.  Maybe I also should have included the Amores on my personal canon?

Propertius, Elegies: (Many read Catullus and Ovid and unfortunately bypass Propertius.  But his poems are just as good and important.)  Once again, I have to go with the trustworthy Loeb edition translation by G.P. Gould.

Lucan The Civil War: (A very underappreciated epic from the Latin Silver Age)  And yet again, I have to go with the Loeb edition of Lucan translated by J.D. Duff and originally published in 1928.

I realize that there are quite a few Loeb editions on the list, but the dual text and the older translations have always appealed to me.  Please leave further suggested translations for any of these authors in the comments!

13 responses to “An Addendum to my Personal Canon”