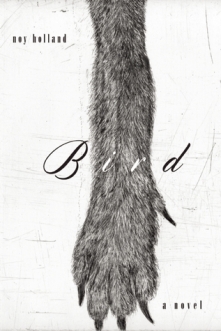 This is a bizarre and surreal book that follows two different periods in the life of a woman named Bird.  And actually Bird doesn’t even seem to be her real name, but a strange nickname given to her by a former boyfriend named Mickey.  When the book opens, we are given a glimpse into a typical day in the life of Bird, a housewife and a mother of two young children.  Her oldest child, although a little boy of an indeterminate age,  is apparently old enough to go to school, is getting ready to catch the bus.  Bird is trying to get her son ready for his day at school and make him breakfast while also dealing with the needs of her infant daughter.  From all outward appearances, Bird seems to have a happy and content domestic life.

But in between her domestic tasks Bird keeps remembering the time she spent with her old boyfriend named Mickey.  Bird met Mickey when she was very young and they lived on very little money in horrible, decrepit apartments.  For quite some time, they carried on a vagabond existence fueled by drugs and sex.  When Bird finds out that she is pregnant, she and Mickey could not be happier and they immediately name their unborn child Caroline.  Even though they have little money and no jobs, they are happy and want to make a life together with their baby.  But when Bird has an unexpected miscarriage, things begin to come apart in their relationship.  Mickey starts wandering off for days at a time and his moods and behavior become unpredictable and erratic.

After the miscarriage, Bird and Mickey go on a road trip, traveling part of they way in his old car and eventually ending up on foot and hitchhiking.  The parts that describe their journey are very strange and disjoined, especially when compared against the backdrop of Bird’s current, orderly life.  At one point when Bird is home alone with her baby, she drinks rum and takes a hot bath with her baby.  This episode of drinking during the day makes us wonder if there is some discontent in Bird’s life, or if she maybe at least has a longing for the chaos and freedom that she experienced with Mickey in her youth.  Bird also revisits her past through conversations with her old friend Suzie with whom she speaks to a several points throughout her day.  And Bird further recounts letters that she has written to her mother which express the extremes of happiness and sorrow that she experiences in her life with Mickey.

I also have to mentioned the language of the book which takes some getting used to.  When I first started reading the story I almost gave up because I found the disjointed and choppy sentences very distracting from the story.  Some paragraphs even go on for half a page with single words that serve as sentences.   However, as I read the more cohesive parts of the story, I  became very interested in Bird’s narrative.  I also started to view the disjointed language as something very fitting for the turmoil that Bird feels in her mind.  On the one had she loves her husband and children, but on the other hand she can’t help but feel pulled back by the memories of her past.  I don’t think Bird would give up her family to find and be with Mickey again, but her time with him has left an indelible and ineradicable impression on her memory and on her soul.

Noy Holland’s debut novel, Bird, is forthcoming from Counterpoint in Fall 2015. Her collections of short fiction and novellas include Swim for the Little One First (FC2), What Begins with Bird (FC2), and The Spectacle of the Body (Knopf.) She has published work in The Kenyon Review, Antioch, Conjunctions, The Quarterly, Glimmer Train, Western Humanities Review, The Believer, NOON, and New York Tyrant, among others. She was a recipient of a Massachusetts Cultural Council award for artistic merit and a National Endowment for the Arts Fellowship. She has taught for many years in the MFA Program for Poets and Writers at the University of Massachusetts, as well as at Phillips Andover and the University of Florida. She serves on the board of directors at Fiction Collective Two.