Review: Give Me Your Answer True by Suanne Laqueur

I received a review copy of this title from the author. 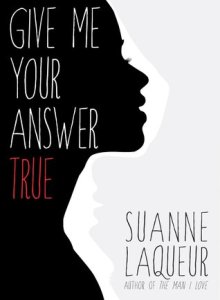 Give My Your Answer True is the sophomore title by indie author Suanne Laqueur.  She takes on a brave feat by deciding to retell her first novel, The Man I Love, from a different character’s perspective.  Many readers might reject this story for fear of being bored when presented with the same plotline.  But Laqueur’s writing and subject matter put a refreshing spin on her original story.

Erik and Daisy are college sweethearts and we read about how they fall hopelessly in love with one another.  Their love is immediate and passionate and what we might expect of a couple in their early twenties with not very many cares in the world.  Their best friends, Will and Lucky, are also paired up and the foursome are happy, in love, and in many ways, very innocent and naïve.  Their bubble of innocence is burst, however, when a gunman shoots Will and Daisy in the theatre where they are practicing for their latest ballet production.

How many times have we turned on the news lately and seen the tragic story of yet another shooting?  Laqueur brings to life the lasting effects that such a traumatic event has on the lives of its victims for months, years and even decades after.  The foursome do not seek out counseling, but instead engage in self-medication through drug use; they are all reeling from the shooting and once the drug use starts the easy and comfortable relationships that existed among the foursome disintegrates.

What I found the most interesting about the book are the different ways in which each character deals with the shooting.  Erik completely rejects his friends and closes himself off; Will, on the other hand, becomes more clingy and must know where his friends are at all times.  The most detailed storyline is that of Daisy’s and it is she who has the most self-destructive behaviors.  Daisy spirals into such a deep depression that she starts cutting herself.  It is evident that the author did painstaking research into the after effects of a tragedy, the behaviors of someone who engages in cutting, and the types of therapy that victims might seek out.  This story reminded me that once the camera crews disappear and these shootings are no longer the top news stories, the victims are never truly free of their demons.

The other relevant topic that Laqueur brings up in her writing is that of  sexuality and the fact that sexual preference is not always clear cut or black and white.  Many might assume Will is gay because he is a dancer;  but he actually prefers to have long-term physical and emotional relationships with women even though he also experiments with men.  Will”s sexual choices are accepted without question among the foursome–even his girlfriend Lucky is fine with it.  Will is confident and unapologetic about exploring his sexuality and because he is so open about it, then so are his friends.

GIVE ME YOUR ANSWER TRUE is not only a great story, but it also raises important and tough social topics that are relevant and timely.  She promises to continue Erik and Daisy’s story in her third book which I also look forward to reading.

Suanne Laqueur’s first novel, The Man I Love won the 2015 Beverly Hills Book Award for romance, and a gold medal at the 2015 eLit Book Awards. It was a finalist at the 2015 International Book Awards and took an Honorable Mention at the Los Angeles Book Festival.

Suanne graduated from Alfred University with a double major in dance and theater. She taught at the Carol Bierman School of Ballet Arts in Croton-on-Hudson for ten years. She lives in Westchester County, New York with her husband and two children. An avid reader, cook and gardener, she started her blog EatsReadsThinks in 2010 and now blogs at www.suannelaqueur.com

One response to “Review: Give Me Your Answer True by Suanne Laqueur”