I received an advanced review copy of this title from the publisher through TLC Book Tours.  Michael Perry is a humorist who is known for his nonfiction books.  This is his debut fiction novel. 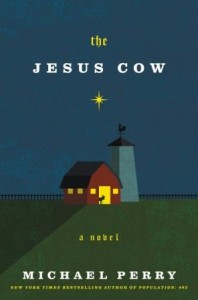 Harley is a simple bachelor living in rural Wisconsin on a very modest 15 acre farm.  Although he works 12 hours a day in a factory, he keeps a few beef cattle as a hobby.  When a calf is born on Christmas Eve with the image of Jesus on its hide, he views it as a bad omen.  He does everything he can to keep others from finding out about his special calf.  His best friend, Billy, thinks he should cash in on his holy bovine, but Harley doesn’t want to disturb his quiet life.

But when the calf gets out of its pen and the mail lady sees it, the pictures of this special calf go viral.  The scenes in the book in which droves of the faithful are clamoring to get a look at the “Jesus Cow” are hilarious.  The only way that Harley can stop this madness is to hire a California public relations firm that closes off his property with security forces which the President would be jealous of.  Harley’s quiet, unassuming life has been shattered in a matter of hours.

Harley also has a love interest throughout the book.  When he spills coffee on Mindy at the local gas station he can’t keep his mind off of her.  She is a character full of quirks and surprises; she lives in an old granary and is an artist who uses metal and welding as her medium.  The entire cast of characters in the book are all quirky for that matter.  Maggie, widowed at a young age, runs her own towing and car wrecking business; Carolyn is a former, disgraced academic who lives at the base of the town’s old water tower.  And Klute is a failed real estate tycoon who is addicted to listening to ridiculous motivational tapes.

In the end, the lives of all these lonely characters end up intertwined.  My only complaint about the book is the rather abrupt ending for which the reader is not really prepared.  It felt rushed and incomplete.

THE JESUS COW is a funny and entertaining story that makes for the perfect light beach read this summer.  Michael Perry finds humor in small town life, religious fanaticism and the perils of modern technology.

Michael Perry is a humorist, radio host, songwriter, and the New York Times bestselling author of several nonfiction books, including Visiting Tom and Population: 485. He lives in rural Wisconsin with his family

6 responses to “Review: The Jesus Cow by Michael Perry”