I received an advanced reader copy of First Impressions from the publisher through NetGalley. 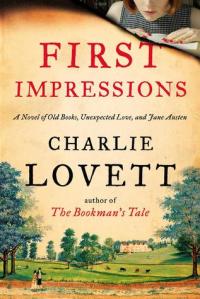 This book is a mix of genres, including historical fiction, romance, and Jane Austen fan fiction.  The narrative alternates between two periods of time.  The first point of view is through the eyes of Sophie who has grown up on an estate that has been in her family for generations.  Although her parents house has a grand library which contains rare editions of many books, it is her Uncle Bertram who instills in Sophie a love of reading and old books.  Sophie’s Uncle Bertram lives in a flat in London where she often visits him and looks through his own unique collection of rare books.

When Sophie’s uncle dies suddenly in an accident, Sophie suspects foul play.  This is where the novel veers toward being a mystery.  She comes to believe that his knowledge of a certain old book that is contained within the family’s library might have something to do with his untimely demise.

While Sophie is investigating her uncle’s death, she also has two love interests.  One of them, and American named Eric, makes her have that butterflies in her stomach feeling.  The second love interest, a man name Winston, whom Sophie meets in the antiquarian bookshop where she works, I found a bit out of place in the story.  Sophie descries Winston as being very handsome and charming and she has mind-blowing sex with him on their third date.  She admits, however that she does not love Winston and her mind keeps wandering to thoughts of Eric.  I thought that the casual sex did not fit in with the character of Sophie or the Austenesque tone of the book.

The other narrative in the book was from the point of view of Jane Austen herself and a relationship she has with a clergyman who serves as her friend and confidant.  Jane reads her manuscript of Sense and Sensibility to Mr. Mansfield and he gives her recommendations and encouragement.  His tome of allegories also serves as an inspiration for a novel she is writing entitled First Impressions, which will, of course, become Pride and Prejudice.

I thought that they way in which the author tied together the alternating points of view was clever.  The novel would have been stronger if so many competing genres were not mixed together.  Nevertheless, bibliophiles and Austenphiles will still appreciate the references to old books and the characterization of England’s most famous female author in First Impressions.

I am very curious to see what my readers think about genres and if it is possible for an author to successfully blend multiple genres into one book?  Leave me some comments!