I received an advanced copy of this book from Little, Brown and Company through NetGalley. 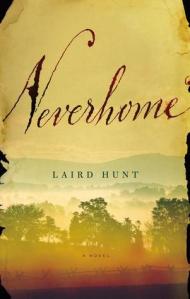 Constance is a farmer from Indiana who wants to see more of the world outside of her rural farm. She decides that fighting in the Civil War will give her this chance. Her husband Bartholomew would not be a good soldier and so she decides that she will make the sacrifice and march off to war and fight for her country in his place. She puts on the Union uniform, hides her feminine qualities and in this disguise travels down south to the heart of the battleground where she takes on the name of Ash Thompson.

Ash has many interesting adventures that make her a legend among her fellow soldiers. At one point she is given the nickname “Gallant Ash” and a song is written about her. She fights alongside men and oftentimes is a better fighter, and certainly a better sharpshooter, than the men. She is constantly afraid that her secret will be revealed and it is amazing that throughout the entire story only a handful of people suspect her true identity.

NEVERHOME is brilliantly written in Constance’s own voice and we see the horrific landscape of the civil war through her eyes. I admire this book as a well-researched historical novel and Laird Hunt even uses the correct accents and turns of phrase from someone in this era. The dream sequences that Constance has are vivid and haunting and I suspect that she has what we would call nowadays PTSD. She is so disturbed by some of the horrors she witnesses that reality and dreams start to blend together.

One final aspect of the book I want to mention is Constance’s relationship with her husband.  They have a unique marriage in which they seemed to have reversed what would have been the traditional roles of husband and wife in the 19th century.  Constance is the strong and brave partner while her husband is docile, passive, and even weak.

The story is so interesting and captivating that I actually read it in one day. I could not wait to find out what happens to Constance and the ending was unexpected. I would not be surprised if NEVERHOME becomes an instant American classic that all students of history will find on their course reading lists.

There are many historical fiction novels set during the Civil War.  Leave me a comment and let me know which ones you have read and would recommend.