World War I Centenary: A Review of The End of Innocence by Allegra Jordan 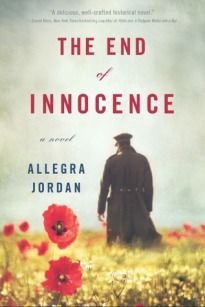 Whenever I start reading a new book it usually takes me a few pages to get used to the prose style of the author.  This was not the case with Allegra Jordan’s new historical novel THE END OF INNOCENCE.  The prose in this book was some of the most mellifluous writing I have encountered in a novel recently.

Helen Windship Brooks hails from a family whose ancestry is among Boston’s upper class that send their progeny to Harvard to become lawyers and doctors and captains of industry.  When the novel begins Helen will be attending Radcliffe College and is excited to join an editing class that is usually only open to the male students of Harvard.  The famous Professor Copeland has heard of her editing and writing skills and has personally asked her to join his seminar.  It is the one class that she truly enjoys and sees as a challenge during her first semester at college.  The poetry that is written for this part of the book is beautiful, especially the last poem that appears towards the end of the novel.

As Helen is attending the seminar at Harvard, she comes into contact with a variety of Harvard students.  These young men have diverse backgrounds and come from countries all over the world.  As the months pass during 1914 many of these young men leave Harvard and enroll in the militaries of their various countries to fight in the Great War.  Helen’s editing class gets smaller every day.  In this subtle way the author reminds us that the war had such an enormous impact on mundane circumstances like the attendance in a college course.

The most important character of this book for me was that of Wils Brandl, a student that Helen meets in her editing class at Harvard.  His mother is a Prussian countess and his father is a Bavarian poet.  When the war breaks out he is subjected to bullying, name calling and racial remarks because of his German descent.  Wils is a poet himself and has no interest in politics or fighting for the Kaiser’s cause.  Many of the discussions, commemorations and writings I have come across about World War I center around the Allied forces.  However, Wils character is a reminder that countless young men left their loved ones and fought, suffered and died on the German side as well.   War is not glorious or something to celebrate, but instead it is sad and tragic no matter which side of the battle field one happens to be on.

This novel inspires the reader to contemplate several poignant questions.  How do we appropriately commemorate those who have passed from this life ahead of us?  What is the appropriate time for mourning?  What, if anything, will successfully honor a life that has been tragically lost?  How do we move forward without the ones we so dearly love?   Allegra Jordan’s novel THE END OF INNOCENCE is a thought-provoking and emotional memorial to the Great War that affected so many lives.

Thanks so much to NetGally and Sourcebooks Landmark Publishing for the Advanced Review copy of this book.

2 responses to “World War I Centenary: A Review of The End of Innocence by Allegra Jordan”