Lovesickness in Proust’s The Captive 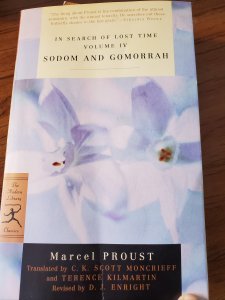 There was an amusing yet horrifying thread going around on literary Twitter about the most painful things people have suffered.  (Follow @Unwise_Trousers for this and other, very interesting content, literary and otherwise!)  But in many ways emotional pain is worse than physical pain, isn’t it?  For instance, I was finding Volume V of Proust, The Captive and the Fugitive, hard to read because of the narrator’s obsessive jealousy and his extreme need to keep his mistress, Albertine, locked away from the rest of the world.  He was spending a lot of time with her at Balbec in the previous book, but towards the end of his time there he decides he really doesn’t love her and is going to break things off with her.  But he finds out about another possible lover of hers—a woman—and his jealousy causes him to become obsessed with her all over again.  He invites her to live with him in his parents’ house in Paris and whenever she goes out of the apartment he has her accompanied by a friend.  Why would he care so much about a woman whom he says he doesn’t really love?  At times he doesn’t even find her attractive and he can’t stand her lowbrow way of speaking.

The passages about his lovesickness, a common trope in literature, serve to explain his behavior.  As I wrote in an earlier post, Catullus in his Carmen 76 is the perfect example of an author equating love to pain and sickness.  He uses words like morbum (disease), pestem (sickness) and perniciem (ruin) to describe the end of his affair.  George Eliot and, of course, Shakespeare, have also adding meaningful contributions to this trope.  Now I would add Proust to my list as he writes:

Of Albertine, on the other hand, I had nothing more to learn.  Every day she seemed to me less pretty.  Only the desire that she aroused in others, when, on learning of it, I began to suffer again and wanted to challenge their possession of her, raised her in my eyes to a lofty pinnacle.  She was capable of causing me pain, but no longer any joy.  Pain alone kept my wearisome attachment alive. As soon as it subsided, and with it the need to appease it, requiring all my attention like some agonising distraction, I felt how utterly meaningless she was to me, as I must be to her.  I was miserable at the thought that this state of affairs should persist, and, at certain moments, I longed to hear of something terrible that she had done, something that would keep us estranged until I was cured, giving us a chance to make it up and to reconstitute in a different and more flexible form the chain that bound us.

His metaphor continues for a few pages—he also wishes to be “cured” so that he might be able to travel and visit Venice.  His jealousy, in particular, is a painful disease:

However, jealousy is one of those intermittent maladies the cause of which is capricious, arbitrary, always identical in the same patient, sometimes entirely different in another.  There are asthma sufferers who can assuage their attacks only by opening the windows, inhaling the high winds, the pure air of mountains, others by taking refuge in the heart of the city, in a smoke-filled room.  There are few jealous men whose jealously does not allow certain derogations.

Like an illness that has invaded his body he is nearly helpless to rid himself of it.  He can try different remedies, but, as he predicts, the only end of it will be the end of himself or the end of Albertine.  The narrator himself is the real “captive” here, isn’t he?

3 responses to “Lovesickness in Proust’s The Captive”