She is the Spider, not the Fly: The Poetry of Emily Dickinson

The breadth of Michael Schmidt’s 600 page, 64 chapter book Lives of the Poets is so extensive that he had to make the biographical sketches of each poet rather succinct and brief.  But this brevity does not detract from the joyful experience of reading his work because one gets the sense that he chooses every word he writes on the page carefully and he makes every sentence, every paragraph significant. He says, for instance, about Emily Dickinson,

Life, time, nature and eternity are the big counters she moves about the rapid little quatrain squares of her verse, but each counter she makes her own through metaphor and her vivid subversions of expectation. ‘Her wit is accuracy,’ says the poet Alison Brackenbury, but ‘She is the spider, not the fly.’ Not being the fly: perhaps that was her strategy of withdrawal from a world in which she saw women snared in the strict geometries of the social web, and decided that for her the freedom of an elected solitude—not of a spinster only but of a recluse—was preferable, even necessary.

Schmidt points out that scholars over the years have come up with a myriad of reasons for her self-imposed solitude—from being rejected by a man or a woman to suffering from agoraphobia—all of which are mere speculations.  “We have the legend,” Schmidt writes, “but the crucial facts in the recorded life are absent.”  Schmidt first becomes aware of Dickinson’s poems at the age of fourteen when Robert Frost visits his school and recites one of her poems aloud; from that point forward he grapples with what, exactly, makes her poems so unique. “Dickinson’s reticence seems part of her poetic strategy: if we could assign the poems to specific emotional events, we would ground them. As it is, they are a miracle and a mystery of language.”

For eight decades editors of her poetry have stripped out Dickinson’s original punctuation; they have been especially targeted her dashes, taking all of them out of her poems.  Editors have also corrected her diction and substituted lower cases letters at the points where in her original poems she had used capitals. The Thomas H. Johnson edition in 1955 restored her original formats for all the poems and it was only then, Schmidt argues, that we finally began to understand her unique voice: “Here is her originality, unmuffled after eight decades of propriety, an irregularity that answers to the darting, tentative process of the poet’s sight and feeling, the rapid transformations that follow an unfolding argument or feeling. Dickinson’s poetry is the drama of process.”

I was reading Dickinson’s collection of Envelope Poems alongside Schmidt’s chapter and even in these poetic fragments one feels her “rapid transformations.” The majority of these envelope poems were written between 1870 and 1885. I found them equally as powerful as her longer, more formal poems. It seems fitting for her that they were jotted down on corners or backs of envelopes.

A139 Begins:
As old as Woe—
How old is that?
Some Eighteen
thousand years—
As old as
Bliss
Joy—

This edition has photos of the original envelopes and transcriptions of each text.

And A317 begins:
On that
specific Pillow
Our projects
flit away-
The Nights’
Trememdous
Morrow
And whether
Sleep will stay
Or usher us—
a Stranger 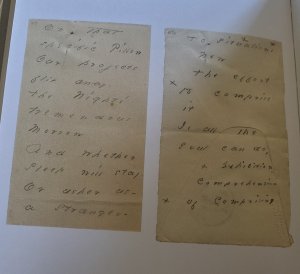 I’m glad to have much more Dickinson and Schmidt to read going into my summer holidays.

5 responses to “She is the Spider, not the Fly: The Poetry of Emily Dickinson”