How Always Alone: Nothing but the Night by John Williams 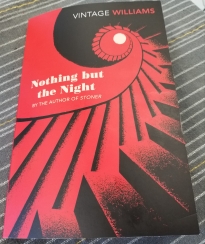 Published in 1948, Nothing but the Night is John Williams’s, little known about, first novel.  It takes place over the course of a single day in the life of twenty-three year old Arthur Maxley who has suffered a very traumatic experience in his childhood.  When we first meet Arthur, he is alone in his apartment—he is most often alone—and after a night of solitary drinking and reading is just waking up from a dream.  The story is intense and suspenseful from the very beginning as Williams slowly reveals the tragedy Arthur has suffered in his early life.  By slowing down time in his narrative, we are given a realistic glimpse into Arthur’s fractured and damaged mind.  For instance, Arthur forces himself to get out of bed and take a walk in the park, but never actually makes it to the park because he goes into at a seedy diner.  The vivid and startling description of his breakfast is a clue that Arthur is truly suffering:

From the chipped blue plate, the egg stared up at him like a knowing, evil eye.  At first, he was amused by the fancy; but as he stared longer and as the yellow eye glared back at him, he became acutely uncomfortable.  He blinked rapidly.

And still the yellow pupil stared senselessly at him from its greasy white orb.  He reached for the bottle of Tabasco sauce and poured a bit of the fiery red liquid on the eye.  As if it were suddenly irritated beyond all endurance, the white surrounding matter became alarmingly bloodshot and developed a network of liquidly shifting veins, changing the vacant expression into something almost frightening.  It looked up at him reproachfully, as if in great agony.

With an effort, he tore his gaze away and forced his lids down to cover his own eyes and he shook his head vigorously from side to side.  He tried to laugh at himself.  These fancies…Why did he allow them to take hold of him?  It was only and egg, a simple thing, and for a moment his imagination (it was only his imagination) had made him think that…

Throughout the course of his ordinary day, Arthur is on edge and easily startled by what appear to be the simplest things.  Two events in particular, though, trigger flashbacks to that fateful day in Arthur’s childhood—a letter and a visit from his father.  Williams slowly builds up to revealing Arthur’s tragic memory at the very end of the book which, I thought, was rather unexpected.  The dramatic suspense and Williams’s depiction of the loneliness of mental illness are the strengths of this book.  No one can truly understand Arthur’s suffering, even if he were able to put it into words.  A brief distraction with a lovely woman at a nightclub only highlights Arthur’s abiding sense of being alone.  He thinks he is happy for a fleeting moment, but then his intrusive thoughts come flooding back to him:

And again the desire to convey to her his utter contentment overwhelmed him.  But there was the barrier, always the barrier of words; and that which he now felt was beyond words, deeper and more meaningful.  He opened his mouth to speak, then closed it again, and said nothing.

For at the moment he realized that this understanding which he so desired was a thing that must come from between them, inviolate and alone, unasked and unacknowledged.  And he thought for a moment that he had discovered the secret.

This was the thing that drew men and women together: not the meeting of minds nor of spirits, not the conjunction of bodies in the dark insanity of copulation—none of these.  It was the tenuous need to create a bond, a tie more fragile than the laciest ribbon.  It was for this that they strived together, ceaselessly and always really alone; it was for this that they loved and hated, gathered and threw away. For only the little thread which they could never test for the fear of its destruction, for only the delicate thread which they could never secure for fear of breaking it in two.

How alone we are, he thought. How always alone.

The three books of Williams’s that I have read—Stoner, Augustus, and Nothing but the Night—are all very different stories.  I would advise not to go into this short novel expecting any of the narrative elements that are in his other two books.  What is similar, however, in all three novels is the author’s brilliant and mesmerizing way he uses language; there is something about Williams’s style of writing that completely absorbs me and draws me into these different worlds he creates.

(I read the Vintage edition published in the U.K., but NYRB Classics is also reissuing this book later this year.)

15 responses to “How Always Alone: Nothing but the Night by John Williams”