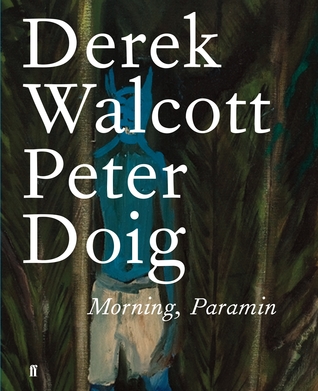 This beautiful collection of poetry and art is a collaboration between the Nobel award winning poet Derek Walcott and landscape painter Peter Doig.  Fifty of Doig’s inspiring paintings are presented in full color with a corresponding poem written by Walcott on the facing page.  The poet was born and raised in St. Lucia in the West Indies and resided there up until his recent death; Doig was born in Scotland, lived in Canada and England and since 2002 has lived in Trinidad. Doig is considered one of the most successful, living figurative painters  A love for the Caribbean—its landscapes, its people, its history, is evident in this collaboration. In the “Dedication” Walcott writes to Doig about his island:

hot beaches you never put your feet on,
the wisdom you get from water-bearded rocks—
they’re yours: those scenes I knew in my green years
with a young man’s joy at Choc, at Blanchisseuse.

But the themes in their art also extend well beyond their beloved island home and include reflections on love, mourning, aging and the ordinary pleasures of everyday life. Walcott’s poems are not literal interpretations of the scenes and figures in Doig’s paintings.  Sometimes he does comment on a particular detail of a painting, but more often than not they are meditations, memories and thoughts inspired by Doig’s art.  What we are reading is Walcott’s reactions to the poems that are not, in any way, meant to be the authoritative interpretation of the paintings;  the poems can certainly gives us unexpected ways to view the paintings through the eyes of another artist, but Walcott leaves room for each viewer and reader to add his or her own interpretations.

The first part of the book includes several landscape paintings which cause Walcott to recall scenes of winter and snowfall.  Although such weather is very different from his home in St. Lucia, he finds a sudden and unexpected comfort and serenity in a snowfall. In “Ski Jacket” Walcott writes:

In stricken winter, its melancholy sticks,
the soul is blurred, direction hard to find,
the snowbound roads repeat their cheap effects
and to the snow we might as well be blind.
But sometimes from the welter there appear
things that take definition from the snow
in blinding layout, branches, trees and poles
and windows and window frames, sharp and clear
and packed with heat, a refuge for our souls.

And in “The Architect’s Home in the Ravine” the poet reflects: 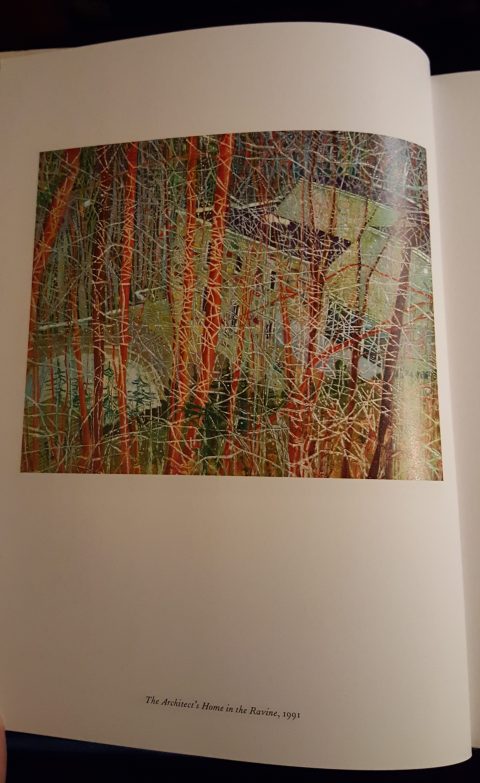 The Architect’s Home in the Ravine

The snow starts piling up from the first word
and piles in chapters and is never heard;
behind the foaming drifts there is a house
with scratchy window panes, steadily assessing
its value as a house, we don’t know whose
still in its sure solidity a blessing.
Why don’t we wait until the snow is finished
the scratching storm stopped, to assess ourselves,
to see that our delight is undiminished
in this house that hid our secrets as a boy
both by the storm’s ferocity and joy?

I found it striking that Walcott oftentimes addresses Doig directly, especially when he is making observations about art. In  the poem facing “Metropolitan” (House of Pictures) Walcott speaks to his friend:

What’s said here is how poverty and art
thrive, but always separately; what Peter Doig catches
is distance. It is the distance of the heart
from what it cannot own, and old, old tune
hummed by the critic with his scarf and patches.

There are too many themes, images and thoughts to fully capture the depth and beauty of this collaboration. But there is one more image worthy of note which keeps reappearing to Walcott through Doig’s poems, that of his deceased second wife who died in 2014 whom he still misses.  In “The Heart of Old San Juan” he specifically mentions her by name as every street in this city is a reminder of her presence:

In the Heart of Old San Juan

To me, the waking day is Margaret:
down every street, every street corner
the boulevards brilliant, with one regret;
every memory is now a mourner.

The poem “Paramin” is beautiful but I found the loving words about his wife and his home to be a strange contrast when compared to Doig’s untitled painting that inspired this poem.  I wonder which aspects of Doig’s piece, with the dark greens and blues in the background and the elongated, male figure in the foreground reminded him of Paramin and his wife?  Walcott writes:

The name said by itself could make us laugh
as if some deep, deep secret was hidden there.
I see it through crossing tree trunks framed with love
and she is gone but the hill is still there
and when I join her it will be Paramin
for both of us and the children, the mountain air
and music with no hint of what the name could mean,
rocking gently by itself, “Paramin,” “Paramin.”

The last few lines are especially haunting since Walcott himself passed away so recently. For those who have never read his poetry, this beautiful book is a great starting point to experience his poetry. When I read Omeros, his epic poem based on Homer, I was completely captivated by his work and this book was a reminder for me of his intelligent, emotional, raw and striking poetry.

10 responses to “Morning, Paramin by Derek Walcott and Peter Doig”