Tempus, Aevum, Aeternitas: a review of December by Alexander Kluge and Gerhard Richter

This title was published in the original German in 2010 and this English version has been translated by Martin Chalmers and published by Seagull Books. 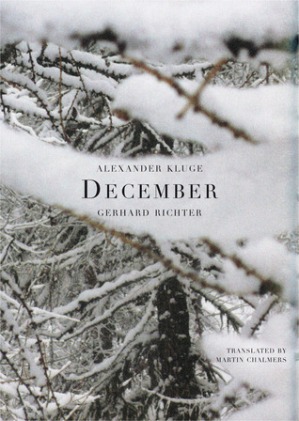 December comes from the Latin word decem, meaning ten because in the original Roman calendar December was the tenth month of the year.  When two new months were added to the beginning of the Julian calendar, thus pushing back December to become the twelfth month, no one bothered to change the name.  As the month which concludes the Julian and Gregorian calendar years it is naturally a month of reflection, of looking back, of becoming more aware of the passage of time.  Kluge and Richter use this last month of the year for the inspiration behind their collection of stories and photographs; there is one entry for each day of the month in December and together the writings and art work serve as a philosophical and poetic commentary about time, fate, choice and even love.

The entries or pieces of writing for each day in December are a mixture of short story, poetry and philosophy.  The dates for the entries vary widely, from 12,999 B.C. to 2009 A.D.  Kluge does tend to favor the events of December 1941 and 2009 as many of the entries are set during one of these two years.  My favorite entry is the one for December 18th, 1941 entitled, “A WRONG DECISION IN WARTIME.”  Kluge describes Marita, the wife of the surgeon Dalquen, who had come to Berlin from her provincial town to stay at the Grand Hotel Furstenberg on Potsdamer Platz.  She falls in love with First Lieutenant Berlepsch but refuses to make love to him on that night because she had not wanted to prematurely hasten their relationship by engaging in one evening of unbridled passion.  Kluge writes, “Only three weeks later she would regret her decision.  The young officer fell in the fighting in northern Russia.”  Marita is deeply upset because she did not take the chance to be with the First Lieutenant when she was presented with a choice.  When Marita is faced with the opportunity later in the war to have one night of passion she takes it, and although it is not with Berlepsch whom she truly loved, she does not regret it.  Kluge’s last quotation in this story is very striking:

For one night full of bliss

I would give my all

Kluge’s story about Marita and her fallen love brings up many more questions than answers.  Do we live our lives to the fullest and take advantage of every precious moment, whether there is a war or a crisis raging around us or not?  Do we take time to embrace and appreciate those whom we love?  And if we make the wrong choice is it irrevocable? Or can we find a way to learn from our mistakes and move on?

December is the month of the winter solstice in the northern hemisphere, so the cold and the snow and the shorter days feature  prominently in Kluge’s stories and in Richter’s photographs.  Another story that stands out is the one dated the 20th of December, 1832: “UNEXPECTED CONVERSION OF A HEATHEN.”  Dr. Wernecke has just helped a woman give birth in the village and is setting out through the snow and the woods to go back home.  Kluge writes:

At first he took the path which the villagers, either out of habit or out of superstition, had created as a kind of VILLAGE EXIT INTO DEAD NATURE, because in this hard-frozen winter such a ‘track’ led into nothingness.

As the doctor gets farther along on his snowy journey he becomes increasingly tired and bewildered.  He keeps on moving so he doesn’t freeze but he is becoming tired and disoriented.  The snow and the woods around him are closing in:

The endless expanse of snow produced a certain brightness in the night.  Wernecke could neither say ‘I don’t see anything at all’ nor ‘I see something.’ For that a clue would have been needed, a difference in the monotony of the snow-covered land. 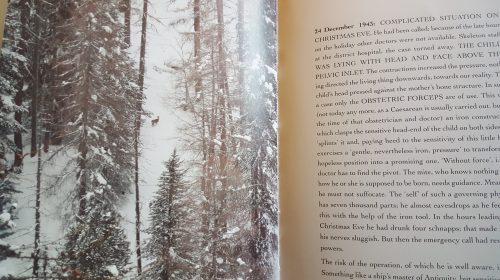 The doctor estimates that he has about four or five hours to live when suddenly he sees a faint, flickering light in the distance.  He isn’t sure if this light is a figment of his bewildered mind but he chooses to follow it anyway.  The light, which is indeed the very thing that saves him, was the lamp of the cathedral verger who at that precise moment was climbing the stairs of the cathedral to ring the nightly bells.

Dull-eyed, Dr. Wernecke nevertheless resolved to trust the light that had soon disappeared.  The light had guided his obstinate heart.  So the doctor found his way to the first houses of the town.

Because the good doctor is saved by this light, he, the “heathen” pays to have an iron lamp installed in the tower next to the bells.  Once again, Kluge poses many deep, philosophical questions with this brief story.  Why do we choose to follow certain paths and not others?  When a light appears in life do we choose to let it guide us, or do we let our obstinate heart convince us to take a less fortunate and unhappy path?  Do we choose to trust and to follow the light like Dr. Wernecke did, or do we ignore it at our own peril?

Each of the 39 photographs in the collection are a variation of trees in a forest that are covered with snow.  The photos are taken up close and give one the feeling of being closed in by the forest and the snow.  Dr. Wernecke’s description of his time in the snow-covered forest, as being able to see something and yet nothing at all, is a fitting description for Richter’s art.  In one picture there is, in the distance, a tiny image of a deer and in the very last photo in the collection a small cottage appears in a clearing through the trees.  Like Dr. Wernecke, can we make our way out of this claustrophobic woods and find that faint glimmer of light?

The second part of the book entitled, “CALENDARS ARE CONSERVATIVE” contains various discussions and meditations on calendars, time, and the passage of time.  One passage in particular caught my attention because of its reference to Latin words for time.  In “Tempus, Aevum, Aeternitas’, an Islamic astrophysicist from Bangladesh and a European ambassador who is a medievalist are discussing different kinds of time by using the Latin names for them.  TEMPUS is time associated with the clock, with checking our watches, it is earthly time that we are always fighting against.  AEVUM, however, is celestial time, experienced only by the angels or other celestial beings.  In Latin it can be literally translated as “Time regarded as the medium in which events occur, indefinite continuous duration, the time series.”  It is oftentimes translated as a “span of time,” a “generation,” or an “age.”  Finally AETERNITAS is brought up by the scholars which, they argue, is the sense of time experienced only by the highest divinity.  It is translated as “infinite time,” eternity,” or “immortality.”  This tricolon crescendo of time presented by the men makes us step outside ourselves and think about time as something other than that ticking clock on the wall or that alarm that wakes us up or that watch which is constantly staring up at us from our wrists.

Seagull Books has published another extraordinary, thought-provoking, beautiful book.  This book is worth owning not only for the literature, philosophy and poetry contained within, but the beautiful prints reproduced on glossy, heavy weight paper make it a very special piece.

About the Author:
Alexander Kluge is one of the major German fiction writers of the late- twentieth century and an important social critic. As a filmmaker, he is credited with the launch of the New German Cinema movement. 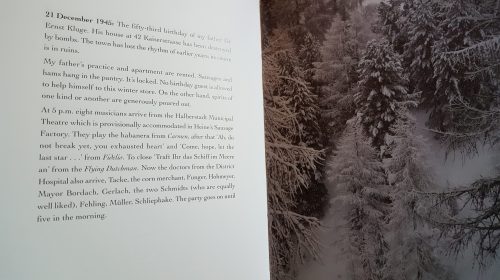 4 responses to “Tempus, Aevum, Aeternitas: a review of December by Alexander Kluge and Gerhard Richter”