I received a review copy of this title from the publisher, Two Lines Press. 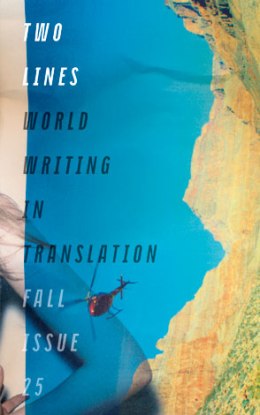 A few times a year I find a book that I rant and rave about and recommend to everyone I know.  I become rather obnoxious with my comments that gush with praise.  I am giving you fair warning that Two Lines 25 is one of those books.  Literature translated from Bulgarian, Chinese, French, German, Hebrew, Japanese, Korean, Norwegian, Russian and Spanish are all contained within the pages of this 192-page volume.  I am in awe of the fact that the editors crammed so many fantastic pieces into one slim paperback (there I go gushing again.)  This is the type of book that everyone needs to experience for him or herself; but I will attempt to give an overview of some of my favorite pieces.

The volume begins with a humorous and absurdist short story written by Enrique Vila-Matas and translated by Margaret Jull Costa.  I have to mention that not only is the English translation provided in these brilliantly collected pages, but an excerpt from each text in the original language also appears on the facing page in a colorful light blue that matches the artwork on the cover.  Vila Matas’s begins his story, Sea Swell, on a jarring and depressing note:  “I had a friend once.  Indeed, at the time, I only had one friend.”  This nearly friendless narrator, who is also completely broke, visits his one friend, Andre, who is living in Paris.  The unnamed narrator is an aspiring writer and Andre graciously agrees to introduce the narrator to Marguerite Duras.  The story becomes increasingly absurd when Duras offers the narrator an attic flat to rent for practically nothing.  But the narrator almost ruins the entire encounter because of his edgy demeanor which due to the two or three (he isn’t sure exactly how many) amphetamines he has ingested.    The expectation throughout the first few paragraphs is that the narrator is an absolute emotional mess and his friend Andres will have to come to his rescue.  But after Andre drinks two bottles of wine at a dinner party hosted by Duras, it is the narrator who has to pull Andre out of the Seine.  Vila-Matas, in the span of a few pages, writes a ridiculously funny tale but one that finishes with unexpected and surprising turn of events.

Russian author Dmitry Ivanov’s writing can also be found within the pages of this brilliant book.  His short story, Where Sleep the Gods, which is translated by Arch Tait, revolves around the Winter Olympics in Sochi and Putin’s strategy to sell the Olympics to the people of Sochi.  The main character in the narrative, a self-proclaimed “creative,” is named Anton and lives a comfortable life in Moscow while working for an ad agency.  Anton is used to dealing with wealthy customers who only demand the best that their money can buy.  Anton’s strategy in dealing with his wealthy clients is to adopt an air of aloofness: “He was accustomed to treating these types in a perfunctory, even insolent manner.  This was not risky, but, on the contrary, the surest approach to respect.”  When Anton is escorted in a private jet to meet a particularly important client he prepares to don his mask of insolence;  but when Vladimir Putin enters the room any and all attempts at smugness instantly dissolve.  Anton is quickly given the task of marketing the Olympics to the Sochians and is whisked off to that city to set up his Olympic headquarters.  What Anton discovers about the Sochians is astute and funny.  After spending about an hour in that city he decides that his slogan will be: “Thieves, because poets.”  You must read Ivanov’s humorous and brilliant story to fully get the joke!

Finally, I would like to discuss a piece in the collection that occupies the creative literary space somewhere between poetry and philosophy.   Nude Enumerated, written by Jean-Luc Nancy and translated by Charlotte Mandell, is a lyrical reflection on the different societal and emotional views and reactions that we have to nudity. The writing reminds me of Pascal Quignard whose philosophical poetry has also been written in shorter pieces which manage to be unexpectedly thought-provoking with only a minimal amount of words.  This was my favorite translation from the collection and the purchase of the book is worth it just for this one piece.  Nancy begins his reflection with a series of antonyms:

Nancy proceeds to challenge us to look at different types of nudity that occur in different circumstances; his words make us uncomfortable but at the same time they make us think more deeply about the experiences we have with our unclothed human bodies.  Note also in this passage that Nancy’s asyndeton, lack of connectives like “and” or “or”, emphasizes the complexity of nudity:

Always elsewhere the male/female nude; not here, which welcomes

only clothed people, but over there somewhere undecided  at a

distance, within reach of desire of touching flattering hiding staining.

If you buy one book this month, if you only buy one more book for this entire year then I implore you to make Two Lines 25.  I haven’t even mentioned the poetry and essays that this volume also offers.  I am wondering how the editors at Two Lines go about choosing what literature to include in their collections.  I have in my mind an image of them exhaustively scouring the world in search of only the best of the best.  I don’t know how else they could produce such an astonishing collection.

CJ Evans is the author of A Penance (New Issues Press, 2012), which was a finalist for the Northern California Book Award and The Category of Outcast, selected by Terrance Hayes for the Poetry Society of America’s New American Poets chapbook series. He edited, with Brenda Shaughnessy, Satellite Convulsions: Poems from Tin House, and his work has appeared in journals such as Boston Review, Colorado Review, Indiana Review, Pleiades, and Virginia Quarterly Review.

CJ is the editor of Two Lines Press, the publishing program of the Center for the Art of Translation, which has quickly grown into a premier publisher of international literature, and he has edited translations of the works of authors like Marie NDiaye, Jonathan Littell, and Naja Marie Aidt. He also edits Two Lines: World Writing in Translation, a bi-annual journal of the best international literature in translation and curates Two Voices, an event series in San Francisco. He is a contributing editor for Tin House, and occasionally teaches, most recently in the MFA program at the University of San Francisco.

Prior to working at Two Lines Press, CJ was an editor at Tin House for 8 years, and worked at the Academy of American Poets. He received his MFA from Columbia University, and his BA from Reed College, where he wrote a thesis on the poetics of American Hip-Hop. He was the recipient of the 2013 Amy Lowell Traveling Scholarship, and currently lives in San Francisco with his wife, daughter, and son.