I received a review copy of this title from Yale University Press  via NetGalley.  This book was published in 2001 in the original French and this English version has been translated by Penny Hueston. 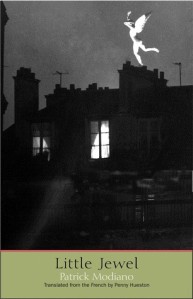 Thérèse  thought she had put her horrible childhood behind her until one day when she is on the metro in Paris she sees a woman with a faded yellow coat whom she thinks might be her long lost mother.  The brief narrative which is written from the point-of-view of this nineteen-year-old woman has multiple layers of imagery and themes which showcase Modiano’s great talent as a writer.

As we gradually get to know Thérèse through her own thoughts and words, we learn that she is alone in the world and is trying to figure out what she wants to do with her life.  She takes on temporary jobs such as babysitting and she lives in a tiny room in an apartment building that used to be a hotel.  When she sees the woman on the metro who resembles her mother she wanders around the streets of Paris looking for this woman again.  As she wanders through the city she replays her unhappy childhood memories in her mind and she is overwhelmed by emotions that she thought she had left in the past.

Thérèse’s mother had the intention of coming to Paris and being a prima ballerina but an injury to her ankle ended her career very early on.  Thérèse’s birth seems to have been a mistake or a surprise for her mother who never showed any affection, kindness or maternal love for her daughter.  Even the nickname she gives her daughter, “Little Jewel,” is meant as a stage name for the television appearance she forces upon her daughter.

Thérèse has no idea who her father is and the only family member she meets is a man who watches her once a week and is told that he is her uncle.  At the age of five Thérèse is left alone for days on end as her mother suffers episodes of depression and locks herself away in her bedroom.  Her mother abandons the poor child for good by putting her on a train bound for the suburbs where Thérèse comes to live with one of her mother’s friends.   After a few years pass Thérèse is told that her mother died in Morocco but she is not given any details as to how she died or why she was in Morocco.

This sense of abandonment never leaves Thérèse as she continues to have very few emotional connections into her young adulthood.  The past weighs on her so heavily that she cannot move forward and make a fulfilling life for herself that is distinct from her early years.  She does manage three important connections with other people throughout the course of the story and it is this tenuous and fragile contact with other humans that saves her in the end.

Modiano is a master of imagery and he does not disappoint even in this short narrative.  Images of light keep appearing to  Thérèse and Modiano hints in the text that his character will see the proverbial light at the end of the tunnel after the events of this story have concluded.  The little girl whom she babysits for always keeps a light on in her bedroom so she won’t be afraid in the dark.  One night when Thérèse is wandering around Paris in the dark and is at her wits end, she sees a solitary light from a pharmacy and the pharmacist provides physical and emotional support.  Finally, the most brilliant and subtle imagery of light in the story is connected with a man whom Thérèse also meets by chance on the streets of Paris.  This man is a translator of radio programs from around the world; he brings Thérèse back to his apartment and when his radio is on a green light appears which makes Thérèse feel calm and connected to a world of voices that she can hear but cannot see.

Readers seem to have a love or hate reaction to Modiano’s writing and I would most definitely put myself in the former category.  I also reviewed his collection of short stories entitled  Suspended Sentences which was also published by Yale University Press.  I would love to hear what other Modiano books that others have enjoyed.

About the Author:
Patrick Modiano is the winner of the 2014 Nobel Prize for literature and an internationally beloved novelist. He has been honored with an array of prizes, including the 2010 Prix mondial Cino Del Duca by the Institut de France for lifetime achievement and the 2012 Austrian State Prize for European Literature. He lives in Paris.

Filed under France, Literature in Translation