I received a review copy of this title from Seagull Books.  This book was published in 2010 in the original German and this English version has been translated by James Reidel. 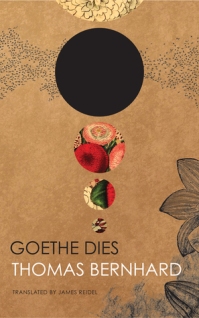 This slim volume of four short stories by Bernhard is difficult to describe in a brief review.  I experienced them and reacted to them as I would poetry and as a result my instinct is to analyze just about every line in these stories; but then my review would be the same length as this edition of stories.  One must really read Bernhard for oneself in order to fully grasp what is the Bernhard literary experience.  The stories are dripping with dark satire and are laden with a rebellion against his native home of Austria.  No topic related to his homeland is off limits as he pokes fun at the Austrian government, Catholicism, Austrian literature and even his relationship with his Austrian parents.

The rhetorical devices that Bernhard uses in his prose give a lyrical feeling to the text.  The persistent repetition of words or phrases, for instance, enhances the level of biting satire in the stories.  The incredibly long sentences give the stories a meandering and aimless feel to them;  we are never sure when or if Bernhard is getting to the point of his story.  In the title story, “Goethe Dies”, Goethe is nearing the end of his life and he insists to his aids and secretaries that he must meet Wittgenstein before he slips away.    The idea of this anachronistic meeting is funny in and of itself but the silliness of the meeting is enhanced by the characterization of Goethe who is a cantankerous old man that will not take no for an answer.  Why his secretaries and assistants object to Goethe’s meeting with Wittgenstein is never clearly articulated by any of them.  Bernhard’s use of indirect speech increases the ridicule of this famous German philosopher and his inner circle.

The next two stories, “Montaigne: A Story in Twenty-Two Installments” and “Reunion” ruthlessly mock the parent-child relationship.  Bernhard highlights the codependent nature of the family dynamic which oftentimes serves very little purpose other than to make the parents and child miserable.  In Montaigne, the narrator, similar to the philosopher Montaigne, is trying to lock himself up in his tower so that he can finally have peace from his family.  His family is more interested in business and the narrator wants to be left alone to read good books.  What bibliophile would not be able relate to this?  Bernhard begins the tale of “Montaigne” with:

From my family and thus from my tormentors, I found refuge in a corner of the tower and had, without light and thus without the mosquitoes driving me insane, brought with me a book from the library after I had read a few sentences in it, by Montaigne as it turned out, to whom I am related in such a close and truly enlightening way as I am to no one else.

“Reunion” extends this dysfunctional family dynamic by describing the young narrator as he desperately struggles to free himself from his annoying, hateful parents.  The hyperbole that Bernhard employs in this story made it, for me, the funniest narrative in the collection.  The narrator believes that his parents mission in life is to make him miserable and blame him for all of their problems.  He writes:

Essentially everything about our parents was rough, they were rough and ruthless to our whole lives, I said, whenever they should have always been circumspect with us, caring.  Mother slammed the doors behind her all the time, Father trampled through the house in his old climbing boots.

The parents are in constant search of “peace and quiet” and to him, the narrator, his parents are the antithesis of peace and quiet.  Wherever they go, they disrupt and destroy any chance of peace and quiet.  While on vacation in the Alps, the family hikes to a quiet alcove in the mountains and when they reach the quiet peak the parents rupture the “peace and quiet” by playing instruments.  Anyone who has gone on a family vacation in search of rest and relaxation, but instead has come home more aggravated and anxious,  will most certainly laugh uncomfortably at this story.

These four stories were an excellent introduction to the literary style and talent of Bernhard.  I ordered three more of his longer novels after I finished this volume.  I am very eager to experience his unique writing techniques in a full length book. 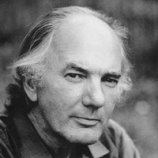 Thomas Bernhard was an Austrian author, who ranges among the most distinguished German speaking writers of the second half of the 20th century.

Although internationally he’s most acclaimed because of his novels, he was also a prolific playwright. His characters were oftenly working in a lifetime and never-ending major work while they deal with themes such as suicide, madness and obsession and, as Bernhard did, they use to have a love-hate relation with Austria. His prose was tumultuous but sober at the same time, philosophic in the background, with a musical cadency and plenty of black humor.

He started publishing in the year 1963, with the title “Frost”. His last published work, appeared in the year 1986, was “Extinction”. Some of his most well known works include “The loser” (where he ficitionalizes about Glenn Gould), “Correction” and “Woodcutters”.  To read more about his works visit: http://www.thomasbernhard.org/.