Review: More Than Words- Illustrated Letters From The Smithsonian’s Archives of American Art by Liza Kirwin

I received an advanced review copy of this book from Princeton Architectural Press. The letters in this collection have been selected by Liza Kirwin and are drawn from the Smithsonian’s Archives of American Art. 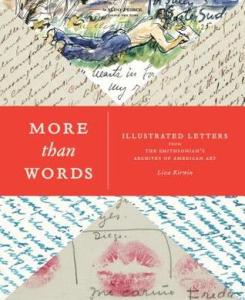 “Letter writing is probably the most beautiful manifestation in human relations, in fact, it is its finest residue.” -John Graham to his third wife Elinor ca. 1958.

This book is a gorgeous collection of letters written by famous American artists, but, as one would expect, artists are not content to capture their thoughts and experiences with mere words.  More Than Words proves that artists think in visual terms even when they are doing everyday, mundane tasks like writing letters.

The book is divided into six chapters which include travel letters, love letters, letters that are a play on words, letters with illustrated instructions and thank you letters.  Kirwin states in the introduction, “The letters, culled from the collections of the Smithsonian’s Archives of American Art, provide an intimate view of the artists’ world–their family lives and friendships, passions and heartbreaks, business relations, travels and artistic training.”

When one is a famous painter and illustrator like Allen Tupper True (1881-1955), no ordinary postcard will do when describing the experience of the skyscrapers while on a trip to New York.  True writes to his daughter: “Dear Jane, Many thanks for your letter and a lot of kisses for you.  Dad.”  True embellishes the hotel stationary by adding his own artistic touch in order to fully capture the New York skyline for his daughter.  He also includes in his illustration a very diminished picture of himself so that she can understand the grandiose nature of these buildings.

When writing to his finacee, caricaturist Alfred Frueh (1880-1968) depicted his elation at receiving letters from her. He called her letters “Pinkies” because of the pink stationary on which she penned her letters. He actually cuts up the “Pinkies” and incorporates them into his drawings which show him doing various tasks throughout his week while perusing her letters. 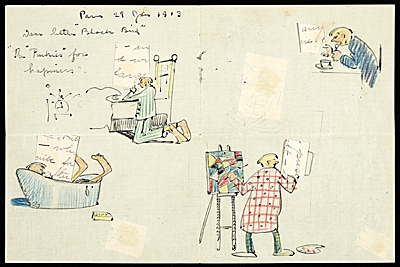 My favorite letter in the collection serves not only as a letter but also as an interactive sculpture. This unique letter is written by Alfred Fruech for his finacee Giuliette. He sends her a letter that, when put together correctly, forms her own art gallery replete with original works of art, so that she can prepare herself for all of the art galleries she is about to see when she arrives in Paris. 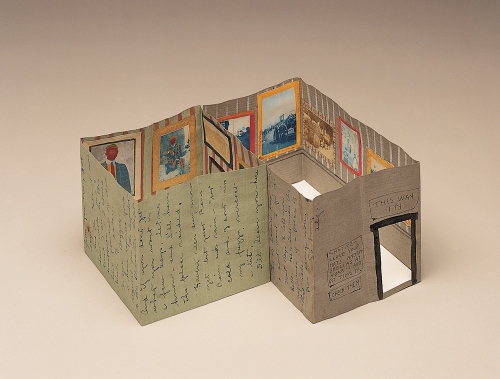 Illustrated letters from some of the most prominent and celebrated American artists are featured in the book, among which include Winslow Homer, Andrew Wyeth, Dorthea Tanning, Andy Warhol and Frida Kahlo. If you are a lover of letters, American Art, and history then this beautiful book is a must have for your collection.

All photos were obtained from the Archives of American Art at this link: www.aaa.si.edu/exhibitions/illustrated-letters
For more information on this book as well as other titles visit Princeton Architectural Press.

About The Author:
Liza Kirwin is the curator of manuscripts at the Archives of American Art, Smithsonian Institution.

One response to “Review: More Than Words- Illustrated Letters From The Smithsonian’s Archives of American Art by Liza Kirwin”