I received an advanced review copy of this book from the author. 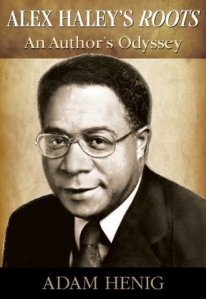 The title of this book is so apt, because an author really does go through an “Odyssey” of sorts after he or she publishes a book.  In Alex Haley’s case his journey included fame, scrutiny, exposure and alienation.  After Haley published his book Roots: The Saga of An American Family it was made into a miniseries.  With millions of viewers tuning in to watch this family saga, Haley was launched into a world of fame where he was in high demand for book signings and speaking engagements.  He makes an incredible amount of money from his book, the miniseries and his lectures.

I was shocked to learn that Haley was sued by a couple of different parties for plagiarism.  Henig provides details of these cases that plagued Haley for years.  With fame comes additional scrutiny and when a reporter begins looking into the authenticity of the accounts of Haley’s family as they are described in Roots, great discrepancies are found between what he wrote and events as they actually occurred.  It was surprising to see that a publisher would have put this book out there without having first checked on the accuracy of Haley’s stories.

What impressed me most about this book is the amount of research that Adam Henig put into this very compact work.  Henig pours through letters, newspaper articles, interviews and even legal documents to provide us with a complete picture of Alex Haley and his controversial book.  If you are looking for something to read in order to commemorate Black History month then I highly recommend this brief but eye-opening book.

Born and raised in the San Francisco Bay Area, Adam Henig attended California State University, Chico, majoring in political science with an emphasis in cultural and international studies. After graduation, he pursued his interest in African American history and literature.

To learn more about Adam and read his book reviews visit his website: www.adamhenig.com.

One response to “Review- Alex Haley’s Roots: An Author’s Odyssey by Adam Henig”