Review: The True and Spendid History of the Harristown Sisters by Michelle Lovric 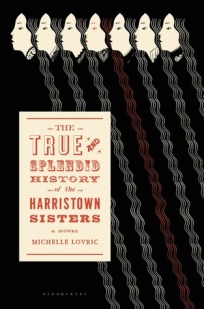 Who knew that hair could make a compelling and interesting storyline?  The story of the Swiney sisters begins in rural Ireland in the 19th century during the famine.  Like many others during that time, the 7 Swiney sisters live in abject poverty with their mother and they have never met their father.  The first part of the book chronicles their lives as they scrape out a bare existence, attend school, and have typical and sometimes not-so-typical sibling fights.

Their most prominent feature is their extremely long and thick hair and the eldest sister, Darcy, realizes that they can make some money by performing a variety show with singing, dancing and skits.  At the end of each show the sisters walk on stage and unravel their hair for all to see.  Men are especially attracted to the site of unbound hair which, in the 19th century, is usually only allowed to be displayed in the intimacy of the bedroom.

As the shows and the reputation of the sisters’ hair grows in popularity, the sisters take on two business partners, Rainfleury and Stoker, who make them rich beyond their wildest imaginations.  But, as is evident from the beginning of their acquaintances with these gentlemen, they are taking advantages of the sisters and exploiting them.  The story comes full-circle when, in the end, they become almost as poor as they were when they were children.

This book is a wonderful and heart-wrenching story of the survival of these sisters during a time when all of Ireland is suffering.  Despite their numerous trials and tribulations, the Swineys always stay together as a family, experiencing marriages, deaths, births, betrayals, affairs, and more.  The author’s greatest strength is the ability to weave a tale as long, elaborate and unique as the Swiney sisters’ hair.

My only complaint about the book is that there were parts of the story which were belabored over a bit too much.  For example, the fighting and sibling rivalry could have been portrayed just as poignantly in about 20 fewer pages.  The drawn out affair between one of the sisters, Manticory and an artist named Alexander also felt very drawn out at times.

Overall, this was an entertaining read and I highly recommend it for readers that love historical fiction set in 19th Century Ireland.  This is a  unique storyline and book.

4 responses to “Review: The True and Spendid History of the Harristown Sisters by Michelle Lovric”